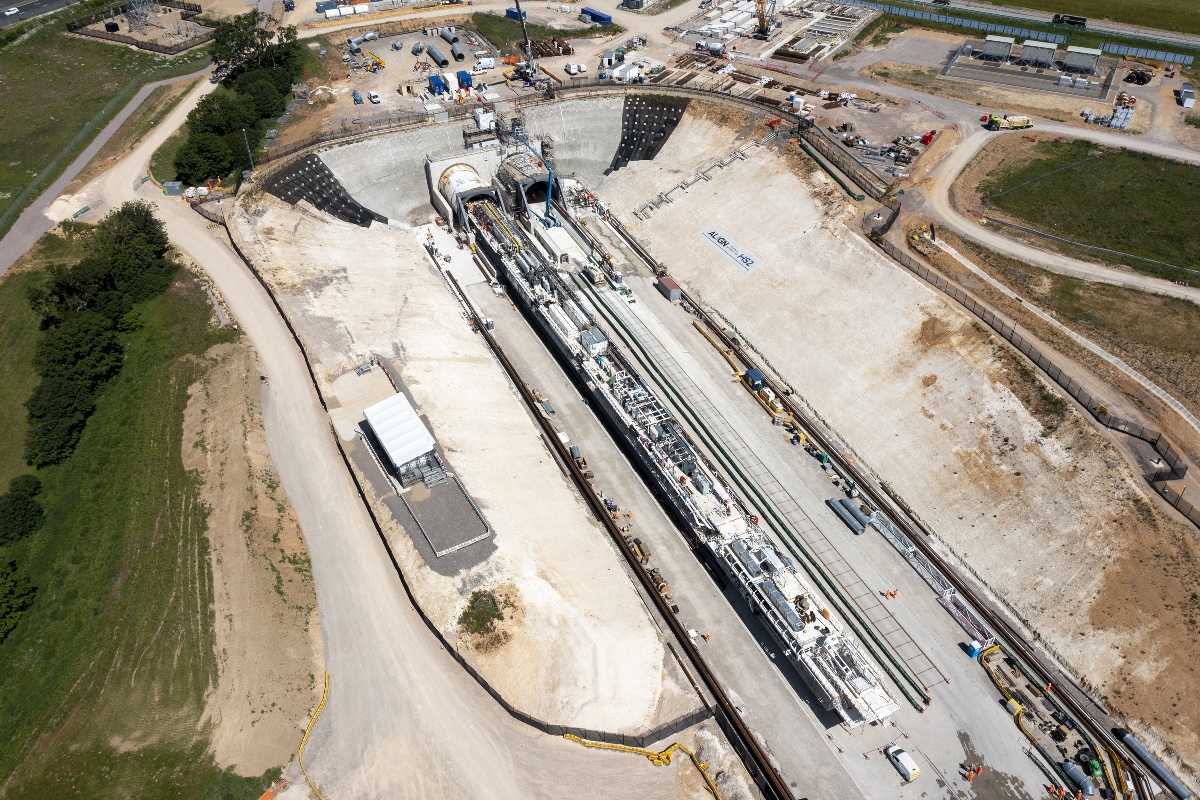 Aerial view of the southern portal shows the second TBM setting off; the first TBM is already on her way and out of siteHS2 contractor Align this week launched Cecilia, the second of two 2,000-tonne tunnelling machines that will excavate the 10-mile long tunnels beneath the Chiltern hills just outside London.

The first machine, Florence, set off on 13th May from the southern portal site near Maple Cross. Her first landmark was passing under the nearby M25 motorway. Only once that was completed without damage was Cecilia allowed to start.

The Align joint venture – Bouygues Travaux Publics, Sir Robert McAlpine and VolkerFitzpatrick – has a £1.6bn (Apr2020) contract to build the Chiltern Tunnel and Colne viaduct. They have been monitoring the M25 for about a year – initially with cat scans and now using inclinometers – to detect any untoward movements that might be attributed to the tunnelling beneath. The crown of the tunnel will be 9.5 metres below the motorway, which is just shy of a tunnel diameter. However, as one of the project team has pointed out, any risk here is nothing compared to the tunnelling that Crossrail did, under, over, and between central London’s infrastructure.

Each of Align’s Herrenknecht TBMs is operated by a crew of 17 people on board, working in shifts to keep the machines running 24/7. They are supported by more than 100 people on the surface, managing the logistics and maintaining the smooth progress of the tunnelling operation.

They allow for semi-continuous boring, where instead of waiting for a full ring of tunnel segments to be put in place before pushing off again, the TBM pushes off against a half-complete ring to accelerate the process.

Each machine operates as a self-contained underground factory, digging the tunnel, lining it with fibre-reinforced concrete wall segments and grouting them into place at a speed of around 15 or 16 metres a day. Each ring is made of seven segments and takes about 45 minutes to install.

Despite starting second, Cecilia will run slightly faster, aided by geological data fed back from Florence, meaning that both machines are due to break through at around the same time, at the back end of 2024. Also, Florence will host most of the work on the cross tunnels that periodically connect the two main bores.

In total there will be 10 tunnel boring machines (TBMs) working to create 64 miles of tunnel between London and the West Midlands for the high speed rail project.

These TBMs are named after astronomer and astrophysicist, Cecilia Payne-Gaposchkin, who was born in Buckinghamshire, and nurse Florence Nightingale, who lived in the county at one time.

HS2 Ltd delivery director David Bennett said: “The launch of our second tunnelling machine at our South Portal site shows that HS2 is are now well on our way to delivering the first and longest tunnel on the project.”

Got a story? Email news@theconstructionindex.co.uk