You are here: Home > News > Invasion of National Assembly 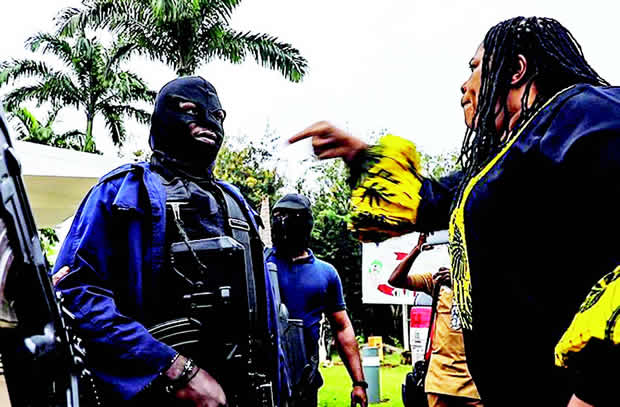 The unauthorised blockade of the National Assembly complex and denial of access to lawmakers by masked Department of State Services operatives on Tuesday for whatever reason is despicable, untoward and portrayed the agency as a reckless organisation operating without temperate rule of engagement.
The Acting President, Yemi Osinbajo’s swift executive order removing the DSS head is not only instructive but a commendable cause of action.
However, the Peoples Democratic Party caucus in the assembly coming to create a scene with protesters in the wee hours of the day when their APC counterparts were far removed from the complex and acting on social media gossip is most unfortunate and smacks of irresponsible politicking.
From the drama that played out in the assembly where the APC caucus was visibly shut out, it is evident that the leadership of the National Assembly has a sinister motive for coming to the complex without their APC counterparts when they are indeed supposed to be in recess. Was the emergency meeting meant to hold at the exclusion of a whole caucus of the assembly?
What is most odious is the playful and thespian mien of the Senate President, who was televised grinning and exchanging banters in the midst of the PDP senators as if he had won a medal, whereas the disgraceful drama called for sober reflection and a demonstration of a bipartisan leadership.
The Senate President needs to look inward as his leadership style is so obstructionist, self-serving and against national development.
Many well-meaning Nigerians are at a loss how Saraki could have in good conscience put the parliament on recess for two months at a peak period when the 2019 election budget bill is pending and the executive needs the legislature most to bring closure to its four-year mandate.
Saraki should learn from the acting President Osinbajo who set aside partisan inclinations and defended the constitution with dignified executive panache.
It would be a disaster if this type of abhorrent tendency is allowed to persist.
Bukola Ajisola,
Victoria Island,
Lagos State,
[email protected] (Visited 26 times, 26 visits today)